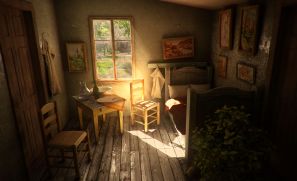 The Art Institute of Chicago recently closed Van Gogh’s Bedrooms. I have to say, Van Gogh really gets me going. If you haven’t already, watch the episode about Van Gogh in Simon Schama’s Power of Art. In fact, watch all the episodes. You’ll thank me.

At any rate, I recently learned a new term that appears to be well-known in art-academic circles but was entirely new to me (the term, not the concept). The term is the unified soul, and what this means in art departments is that one’s artistic practice and academic work twine in a way that makes them almost one and the same. You are a dancer, and your scholarly work focuses on dance. PhDs in Creative Writing are probably familiar with this term as well. You write poetry, and your scholarly work focuses on poetry.

Now, you are probably thinking, “Duh, Carla.” Sure, OK. Duh.

If you want to teach in an art department at a major university being able to show that you have a unified soul is imperative. For the rest of us, the state of having a unified soul is important because it allows multiple entry points for understanding your vocation and ample opportunities for practicing it.

I don’t know about you, but I’ve been told my entire life to “have a backup plan,” a way to make money while I write poetry or fiction. Unless you had parents that knew better (artists or academics, or possibly Gen X parents), you were likely told the very same thing. (Don’t be angry with them, by the way. Or, OK, be angry, but only for a couple hours. Boomers grew up in a very different world.) And it probably wasn’t just your parents who extolled the virtues of the backup. I remember sitting in my very last creative writing workshop my senior year of undergrad while the professor very bluntly told us to go to grad school immediately and get a PhD, or come up with a backup plan. (The grad school part was good advice, the backup plan–well, not so much.) As it turns out, telling an artist that he or she should have a backup plan is the worst advice anyone can give and the worst advice for an artist to follow. If you’re spending your time on a backup plan, then you’re setting yourself up to fail. The moment you started pursuing that second path you gave yourself permission to cop out on your vocation. Pursue a backup plan and you will end up a very unhappy almost-artist or, at best, mediocre. You need ample opportunities to practice your art deliberately if you are to be successful. You just can’t do that if you’re cultivating an additional career. This has been studied and proven multiple times. (Go here and here.) You will not be successful if you split your attentions.

Ok, wait. For the sake of clarity and before we go any further, let us define success.

For a little assistance in this area, I’d like to refer to the super-insightful Alain de Botton, in particular, his July 2009 TED talk. Success should be subjective, right? One should define success by what makes him or her happy and by what brings value to society. But this is the US! And in the US, success is measured by one thing. We know what that is, right kids? It’s your annual salary, of course! I am here to tell you that you have got to shake that shit off. I am defining success as follows: success is being able to sustain yourself by engaging happily in your vocation and having a community that respects you and views your vocation as valuable. OK? OK. Wrap your mind around that. It has very little to do with line 22 on your tax returns. (If you have a different idea of success, you’re on the wrong url.)

There’s a lot of talk right now about Grit (especially since Duckworth won the MacArthur for her research on the topic) and Dr. K. Anders Ericsson’s theory of the 10,000-hour rule, which Malcolm Gladwell discusses in his (genius) book, Outliers. (It doesn’t matter how you feel about Gladwell. Again, it’s the research that counts.) How can you put in your 10,000 hours of deliberate practice if you are busy also cultivating a backup plan? It’s simple: you can’t. In very short order, your backup plan supersedes your art and becomes just “the plan.” It’s simple math.

Now, back to the unified soul. Dear Vincent began his painting career at the age of 27 (in 1880). I say he began his career but what I mean is he threw himself into art much like a moth throws itself at a flame. Talk about a unified soul. Not a sliver between Vincent’s art and Vincent’s life. One day Van Gogh decided to be a painter (not quite literally, but very close) and forsook all else. (Except Absinthe, but that is an entirely different post.) And thanks to this unified soul we have the Bedrooms.

And there are others, if you need more shoring up. Henry Miller, for instance, who began writing in earnest at the age of 40 and quite literally never had any other profession from the day he made up his mind. And speaking of Henry, there’s Anais Nin, obsessively writing from the age of 11 and never slowing down, and doing everything she could think of, as a woman, during the course of her life to make it possible for her to continue writing. Louisa May Alcott spent years writing plays and short stories on the sly when she wasn’t working as a seamstress or a maid or a nurse and never really got anywhere. She finally resolved to write Little Women–her soul-unifying moment–and after that never slowed down, publishing 25 novels, 2 books of nonfiction, 6 plays, 18 short stories, and a few poems in her lifetime (and these are just the ones we know about). She famously remarked about writing that she had decided to “take fate by the throat and shake a living out of her.”

Am I saying we should all live in squalor or marry bankers? Of course not. (But hats off to you, Anais.) What I am saying is that at some point, in order to be a successful artist, you have to unite the pieces of your life–commit to putting them together–even if the only way to do that seems extreme. (It probably isn’t as extreme as you think, by the way. And so you don’t think that I’m advocating starvation, and to illustrate what I mean by uniting the pieces of your life, take as an example my friend, Dave, an organic gardener, poet, and essayist who writes almost exclusively about nature. See how that works?)

A divided house cannot stand. Remember that intention + action = magic. If you need more cushion in the bank before you make a leap to something that unifies your soul, then sit down and write out a plan that includes a timeline. Just make sure you actually follow through on that plan. (One of my favorite blogs extolling frugality in order to enable a fulfilling life is here.) Failure is almost always a lack of action, not a lack of skill or talent. You have to keep moving forward.

I will say that living an art-committed life, unifying that dear, sensitive soul, is not for the faint of heart. It is hard work, takes discipline and dedication, the ability to look at things in a different light, and a willingness to prioritize things in a way that most people won’t understand. (People you barely know might get very, very angry at you when they find out you’ve decided to live an art-committed life. Odd, but true. Recognize envy when you see it; those people are actually angry with themselves.) But it offers transcendence daily, a sense of peace and completeness, and that is worth everything else.

Unify your soul. Find a safe place to do this, and then go for it with everything you have in you, every resource, every ounce of energy. Throw yourself at your practice like Van Gogh the Moth, just stay away from the Absinthe.

A Good Man Is Hard to Find -- My Search for Ronald H. Tammen, Jr.

A new take on Ronald Tammen's 1953 disappearance from Miami University

...and other secret joys

Of Mountains and Monsters

The eco, the gothic, and the ecogothic: literature and photography

The Website for the International Society for Contemporary Legend Research